Acne scars: The different types of scars and how to treat them 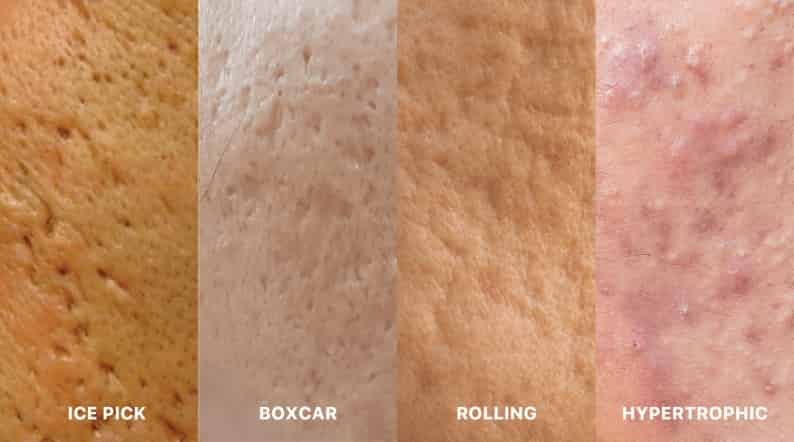 Whether you’re an oily-skinned teen or an adult struggling with a hormonal imbalance, a battle with acne is always unpleasant. Then, once the acne finally clears, you might be one of the millions left with confidence-knocking acne scars. If this is you, you need to know that there are lots of things you can do to improve the look of your skin. Also, it’s never too late to start. It’s just a matter of choosing the right treatment for the type of scar you want to treat.

A rolling acne scar can be shallow or deep but it’s characterized by soft, sloping edges. (Think of rolling hills or undulating plains.) If you had to stretch your skin taut, it might not be visible. They tend to occur after the skin has endured a long-term struggle with inflammatory acne.

A boxcar scar is similar to a rolling scar in that it’s typically shallow and caused by the same type of acne. However, unlike a rolling scar that can look oval or round, a boxcar scar has vertical edges, making them more square-shaped.

Fortunately, both rolling and boxcar type scars respond well to a series of skin needling treatments like Dermapen as well as Laser Genesis. Both of these treatments essentially “damage” the skin, but in a very controlled way. Once the skin recognises that it’s been “injured”, it works to repair the wound via the creation of new, healthy collagen.

Another way to improve the look of indented acne scars is to inject a little dermal filler into them. This plumps them up from the inside out. Also, when filler is injected into the skin, it’s mere presence can encourage it to produce more collagen. This can work very well for rolling scars, but boxcar scars, because of their sharp edges, can be trickier to treat.

Ice pick scars are usually formed after cystic acne gets infected. They’re narrower than rolling or boxcar scars, but a lot deeper. This makes them more difficult, but not impossible to treat. Many of the same treatments that are used to improve the look of rolling and boxcar scars can be used to treat the ice pick-type.

Your doctor might also suggest a punch incision. This is a minor surgical procedure that involves removing the top few layers of skin surrounding the scar. The wound is then stitched together in a way that usually leaves a thin scar that’s much less noticeable than the ice pick type.

Lastly, as far as keloidal acne scars go, these can be treated too. Usually with a Laser Genesis session followed by injecting steroidal drugs and botulinum toxin into the scar. Sometimes this can shrink the scar, but most of the time it will prevent it from growing larger over time.

Once acne finally clears; it almost feels unfair to have to deal with yet another issue. Still, there is a lot you can do to diminish the look of rolling, boxcar, ice pick or keloidal acne scars. To get started, make an appointment with an aesthetic doctor or dermatologist. They can assess your skin’s condition and prescribe the best treatment path to suit your scar type. Before you know it, you could be on your way to smoother-looking skin. Allowing you to face the world with confidence.