Moles VS melanoma: Can you spot the difference? 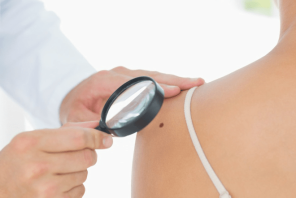 Two years ago, when Vogue China used photoshop to remove all the moles from the body of it’s cover girl’s body, Victoria’s Secret model Gigi Hadid, fans were outraged. The message came through loud and clear: ‘Moles aren’t blemishes, they’re beautiful’. Still, not everyone appreciates their moles or the area in which they’re situated. Even supermodel Cindy Crawford hated hers for years, but today she considers it her trademark.

If you ever wondered, moles are the result of an overgrowth of pigmentation and, for the most part, are pretty harmless. Still, it’s important to keep an eye on them. If they start to change colour or shape, they might actually be melanoma, the deadliest form of skin cancer.

One of the best ways to catch a mole gone bad is to see a skincare specialist who can take pictures of them and track them over time to ensure they don’t morph into something potentially dangerous. This is known as mole mapping.

You can also use the ‘ABCDE’ rule to stay aware of the melanoma signs yourself, that are as follows:

– Asymmetry: Ideally, you should be able to draw a line through your mole and have both halves match the other.
– Border: Potentially dangerous moles have edges that are irregular, ragged or blurred.
– Colour: A ‘good’ mole will be the same colour throughout. Parts of it shouldn’t be darker or a different colour.
– Diameter: Keep an eye on moles that are larger than 6mm across. Most melanomas are larger than moles, but they might start out small and grow.

Evolving: If the mole is changing in size, shape or colour it’s time to see a doctor.


Did you know that Health Renewal offers mole removal? There are three ways in which to do it. The first is via a shave biopsy (never something you want to try at home!), the second is via a punch excision (in which a cooker cutter-like device is used) and the third is a surgical incision, something that’s used when the mole is a large one. In regard to the latter, you can expect to leave with stitches but, as with all the methods, the area will be anesthetised first.

Remember, there’s nothing wrong with a healthy mole. Cindy Crawford is living proof that it can become your personal trademark. Still, if you’ve got one that bothers you or you’d like to have one our doctors take a look at it to ensure it’s not a potentially dangerous one, make an appointment at Health Renewal today. We offer mole removal at selected branches in Pretoria, Gauteng and the Western Cape.