Under-eye bags: How to get rid of them and also tighten up the skin 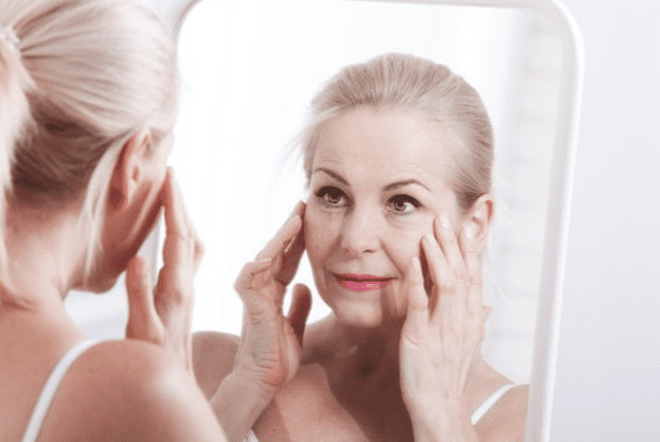 Under-eye circles are never a great look, but they’re easy to cover up with concealer. Under-eye bags, however, are a bit more tricky, depending on the cause. If they’ve popped up overnight, chances are you’re dealing with a bit of temporary puffiness. This could be due to water retention caused by eating too much salt or something beyond your control. Such as a hayfever attack from a wave of springtime pollen. Either way, a little gentle massage or the application of a cold compress should go a long way to reducing them.

Under-eye bags, what can you do?

If, however, you’ve slowly developed them over a prolonged period of time and they’re always present, they’re likely caused by ageing. As we get older, the muscles that support your eyelids start to weaken and the tissues around your eyes become lax. Normal fat that used to sit a lot higher up ends up sliding downwards. It pools in a way that creates an under-eye bag – the kind of excess baggage nobody wants.

A few years ago, there was only one permanent fix for under-eye bags and that was to go under the knife. The operation typically referred to as lower blepharoplasty. It involved a host of risks and, if performed by the wrong hands, could end up making things worse.

Fortunately, thanks to brilliant innovations in non-surgical treatments, you now have options. Ones that don’t require any cutting or even having to go under anaesthetic. For example, mild under-eye bags can be treated via an injectable treatment like mesotherapy or Ciccarelli fat lipolysis . Both procedures involve a series of micro-injections containing fat-dissolving active ingredients. These are injected directly into the under-eye bag. Most patients will require about four to eight sessions. These are spaced two weeks apart, but the effects are cumulative. Within as little as two months, your under-eye bags can be a thing of the past.

Better yet, thanks to a little topical anaesthetic, the treatment is painless and the only downtime is a little mild swelling. The good news is that it shouldn’t last longer than 24 hours. You could literally get injected in the late afternoon and be ready to face your social calendar around the same time the following day!

Once your under-eye bags have hit the road, you might want to rid yourself of crow’s feet. Again, this is an easy fix thanks to muscle-relaxing injections such as botulinum toxin. These temporarily inhibit the muscle constantly contracting around your eyes so the skin isn’t able to crease. The effect tends to last for three to four months. However, you can repeat the treatment whenever it’s needed. This means you get to enjoy smoother-looking eyes for longer.

Another way to tighten up the skin around your eye area is via a collagen-stimulating laser device such as Pearl Fractional. It’s an ablative fractional laser. This means it can remove very small targeted areas of tissues deep within your dermis in a way that encourages fresh new collagen to grow in its place. You can expect about three to five days of downtime involving redness and swelling but only one to two treatments may be needed to get results.

In short, if you’re worrying about under-eye bags or a lined, lax-looking eye area giving away your age, rest assured you can send them packing!