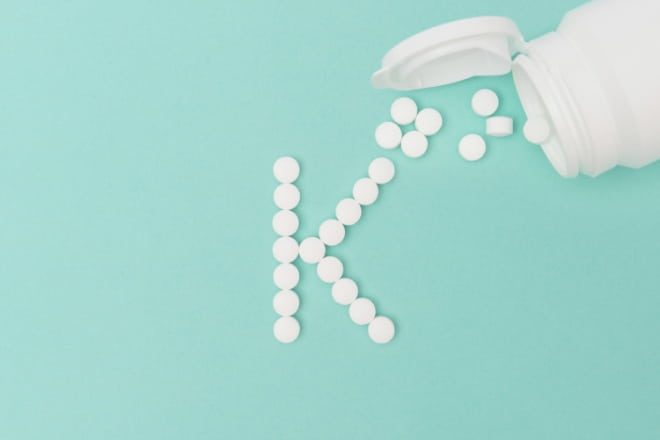 When it comes to vitamins, we all know about the “big boys” – vitamin C, the B group, vitamin E… but have you heard about vitamin K? Many people haven’t, but it plays a vital role in blood clotting, heart health and the metabolism of calcium.

Before we get into it, let’s start with a quick history lesson. The first official record of vitamin K was in 1929 when it was mentioned in a German scientific journal. Due to its newly discovered role in blood clotting, it was referred to as “koagulations vitamin”. Today, however, we’ve since realized vitamin K can do a lot more and that there are two different types. Vitamin K1 is found in leafy green plants like kale and vitamin K2 is from animal sources and fermented foods like kimchi.

Why do I need vitamin K?

Of the two K vitamins, type 2 is the most important for our health. Clotting aside, it’s benefits include promoting the growth of strong, healthy bones and teeth as well as preventing the vascular calcification. The latter is when calcium starts to build upon the inner lining of our blood vessels. This can increase your risk of blood clots and strokes, so it’s definitely something to be concerned about.

The great thing about K2’s calcification prevention abilities is that they’ve proven to be potent. A study performed by the Erasmus Medical Centre in the Netherlands found that participants with a high intake of vitamin K2 were 52-percent less likely to develop artery calcification. Interestingly, those consuming K1 didn’t see any benefits.

As far as bone strength is concerned, vitamin K2 deserves just as much attention as spotlight-hogging calcium. Studies have shown that taking vitamin K2 has reduced the occurrence of spinal fractures by 60-percent and hip fractures by up to a whopping 77-percent!

How to get it

You can get both vitamin K1 and K2 from your diet, although most people get about ten times as much K1 one, which isn’t ideal as K2 is the one you want. Still, your body can convert the K1 you consume into K2. This is good, but often not good enough. In most people, the conversion process is inefficient, so consuming K2 directly is the way to go.

Good food sources of K2 include egg yolks, liver, organ meat like liver and dairy products from grass-fed cows. Still, the vitamin is fat-soluble, so you also need to be eating enough fats to absorb enough of it. Plant-based sources of K2 include fermented food such as natto, sauerkraut, kimchi and miso. Because these aren’t particularly popular in Western culture, many vegans and vegetarians are deficient in K2.

Happily, there’s an easy way to ensure you’re getting enough of what you need and that’s via a supplement. This way, you can ensure you hit your daily target of K2 without having to reach for a tub of kimchi or a jar of sauerkraut every day. Easy, clever and effective!