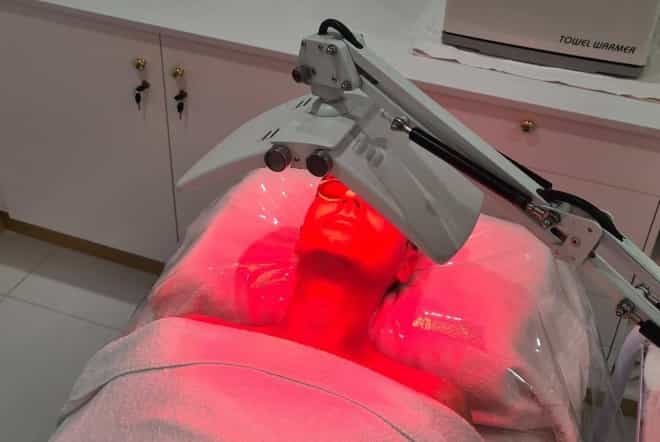 It’s strange to think how, just two decades back, the most cutting-edge machine you’d find in a beauty salon was the pore steamer. Now, however, thanks to leaps and bounds in the aesthetic industry, you’ll be spoiled for choice when it comes to anti-ageing devices. Still, do you know your laser from your LED? To help you out we’re taking a closer look at a few skin devices that really deliver.

Often referred to as lasers, monopolar and multipolar machines are actually radiofrequency skin devices.Both machines convert electrical energy into heat and run it between two points – a plus pole and a minus pole. If you’re using a monopolar device the two poles are far apart. Typically, one pole will be in the device’s head and the other is a pad that’s placed underneath the patient’s body. As the current bounces between the two points at such a rapid pace, it converts into heat. Because this heat travels all the way through your body it can target the deeper layers of your skin including the fatty deposits just below it. This way, ultra-advanced monopolar devices such as Exilis Elite and Lavatron can be used to tighten lax skin, encourage the creation of new collagen and destroy fat cells. Better yet, both of these machines can also act as multipolar devices.

So, what’s a multipolar machine? In this case, both poles exist in the device’s hand piece. Due to their proximity, the device can only enter the skin near each pole. This means their “reach” is more superficial than a monopolar device but they’re still very useful. For example, a VelaShape machine is a monopolar device. Its vacuum-like head sucks up the skin between the two poles that emit a tightening effect. As an added plus, the machine also emits fat cell-reducing infra-red rays making it a great solution to improve the look of cellulite.

Photo Dynamic Therapy (PDT)has been around for years, but the machines are becoming more and more advanced. But first, if you haven’t heard of it, the device is essentially a lamp with different coloured lights. Depending on the wavelength at which they’re set, the lights can stimulate your skin to create more collagen, heal better and even act as an anti-inflammatory.

Just a few ways PDT can be useful? Indulging in yellow light therapy just before an aggressive laser treatment or deeper peel could help speed up your recovery. Also, acne sufferers can benefit from a mix of red light and blue light therapy. The former can reduce redness and the latter has the power to kill pimple-causing bacteria!

One of the best PDT machines on the block is the Omnilux PhotoTherapeutic. Its head contains single wavelength LEDs designed to deliver the optimum light “dose”. They’re also densely packed together. This way, it can ensure the entire treated area is covered to the max. Its would-be competitors tend to deliver a sub-standard treatment because their LEDs are spaced too far apart. Also, they often make wild claims that can’t be backed up by the reams of scientific studies performed using the Omnilux. So, if you’re going to make use of PDT, best you do it right.

A plasma pen is a pen-like device that emits a high-frequency electric current. As the current moves between the tip of the pen and its target, it doesn’t even have to touch your skin. After a quick flash of heat, you’ll be left with a small dot-like wound. (Don’t worry, numbing cream means you won’t feel a thing!) Your skin then goes into healing mode, creating fresh new collagen. This causes the targeted area to tighten up within a matter of weeks. Voila!

A plasma pen is a great way to perform a knife-free eyelid lift. It can also be used to improve the look of scarring and stretch marks. Just a word of warning – due to their increasing popularity, it’s becoming easier to find plasma pens online. These are less potent than medical-grade plasma pens but if used by an untrained hand, the results can be disastrous. Just think about it: If you’re not a mechanic, would it be a good idea to buy a new engine off Gumtree and attempt to install it in your car via a tutorial on YouTube? Didn’t think so. So, if you want to really reap the benefits, be sure to pop into a trusted aesthetic clinic where you’ll find highly-skilled doctors using a medical-grade device such as the Jett Plasma Lift Medical.