Man boobs: Yes, you can get rid of them just in time for summer 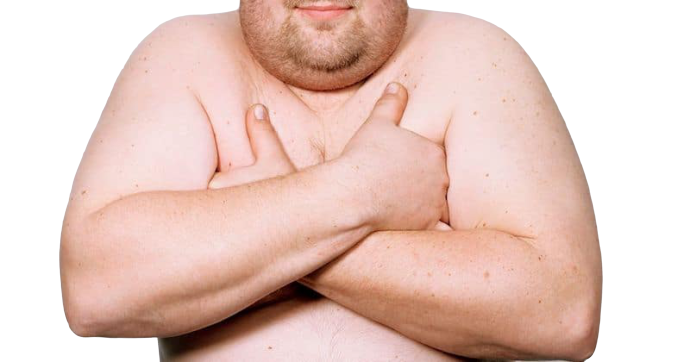 You’ve been working out and dieting like a boss, but nothing seems to shift the excess tissue in your chest.  Is it just a little stubborn fat – or are you suffering from “moobs”?

A contraction of “man” and “boobs”, moobs is also known as gynecomastia – an enlargement of breast tissue in men. While it’s not often talked about, it’s been known to affect between 40 and 60% of men at some point during their lives. Often the symptoms will resolve on their own, but sometimes they don’t and that’s were a little medication or aesthetic intervention can prevail. But before we get into that, let’s chat more about the cause.

There are several things that can cause gynecomastia and these range from genetics, obesity, certain medications and unbalanced hormones. In many cases, it’s the latter. Also, your hormones can be thrown out of whack by many of the other reasons, such as being overweight or taking certain drugs. To explain it, you need to consider your body’s delicate balance of testosterone and oestrogen. When your testosterone levels are low, this results in an excess of oestrogen and gynecomastia can be the result. This is why the condition is common in boys just after they’ve just hit puberty and experience fluctuating hormones, although this often resolves on its own. The other group most at risk are older men because, as the years tick on, their testosterone levels naturally drop.

Don’t like your moobs? There are many things you can do to get rid of them. One way to do it is with medication. For example, tamoxifen, a drug prescribed to treat breast cancer in women has an off-label use as a moob-reducer. Chances are your doctor will also prescribe hormone replacement therapy to help you boost your testosterone levels. This way, the moobs, once reduced, aren’t likely to make a return.

Still, moobs, especially if they’re especially large, don’t always respond just to meds. In this case, you might want to consider a surgical procedure such as liposuction. However, this comes with risks which is why many men opt for non-surgical solutions first. These often have a great success rate and completely remove the need for a more invasive procedure.

One of the more popular ways to get rid of moobs without having to go under the knife is to embark on a series of laser fat removal treatments. This includes i-Lipo Ultra Laser Lipo. A quick, “lunch break” procedure, it doesn’t require any downtime and most patients see results from their very first treatment. It works by painlessly delivering a low dose of light that targets unwanted fat. This causes the fat’s membrane to become temporarily permeable so that the fat can drain out of it and then be excreted via the body the same way you’d lose weight naturally. This is why, after a session, it’s best to do 30 minutes of cardio to burn off the freshly freed fat as quickly as possible.

If you’ve developed unwanted moobs, there are lots of non-surgical ways to get rid of them. Still, not everyone’s a candidate so it’s a good idea to make an appointment with an aesthetic doctor. They’ll be able to prescribe medication should you require it as well as suggest the treatment options that would suit you best. Then, before you know it, you’ll be happy to take your shirt off just in time for pool party season!